KlezNorth 2021 presents three fantastic shows live to your living room from around the world:

Merlin & Polina Shepherd perform together in a way that is rarely encountered. Playing Music from several linked cultures and maintaining the styles, they also incorporate improvisation, freedom and spontaneity.

Сlarinetist, composer Merlin Shepherd, a uniquely innovative force in the klezmer renaissance, and Polina Shepherd, a virtuosic vocalist, pianist, composer originally from Siberia blend traditional and newly composed Yiddish and Russian song with klezmer and southern Mediterranean music. Full of passion, depth & subtlety not often encountered in our global village, their style which has its roots in traditional forms takes us to new dimensions.

Merlin is one of the world’s leading players of traditional East European Klezmer Clarinet style, and apart from his own ensembles he has recorded and played with Boban Marcovic, Fanfara Ciocarlia,  Fanfara Savale, Selim Sesler, Budowitz, Frank London’s Klezmer Brass Allstars and numerous others. Most recently he was Musical Director for Paula Vogel’s “Indecent” at the Menier Chocolate Factory.  hamsaquintet.com

Polina was born in Siberia and grew up in a Russian Jewish home where songs were regularly sung at table. Growing up in Tatarstan placed her close to  Islamic ornamentation and timbre which can be heard in her unique vocal style and four octave range.  Touring with Simkha, the first Klezmer band since Perestroika she sang in dark Soviet theatres, to Boris Yeltsin and to the World. www.polinashepherd.co.uk 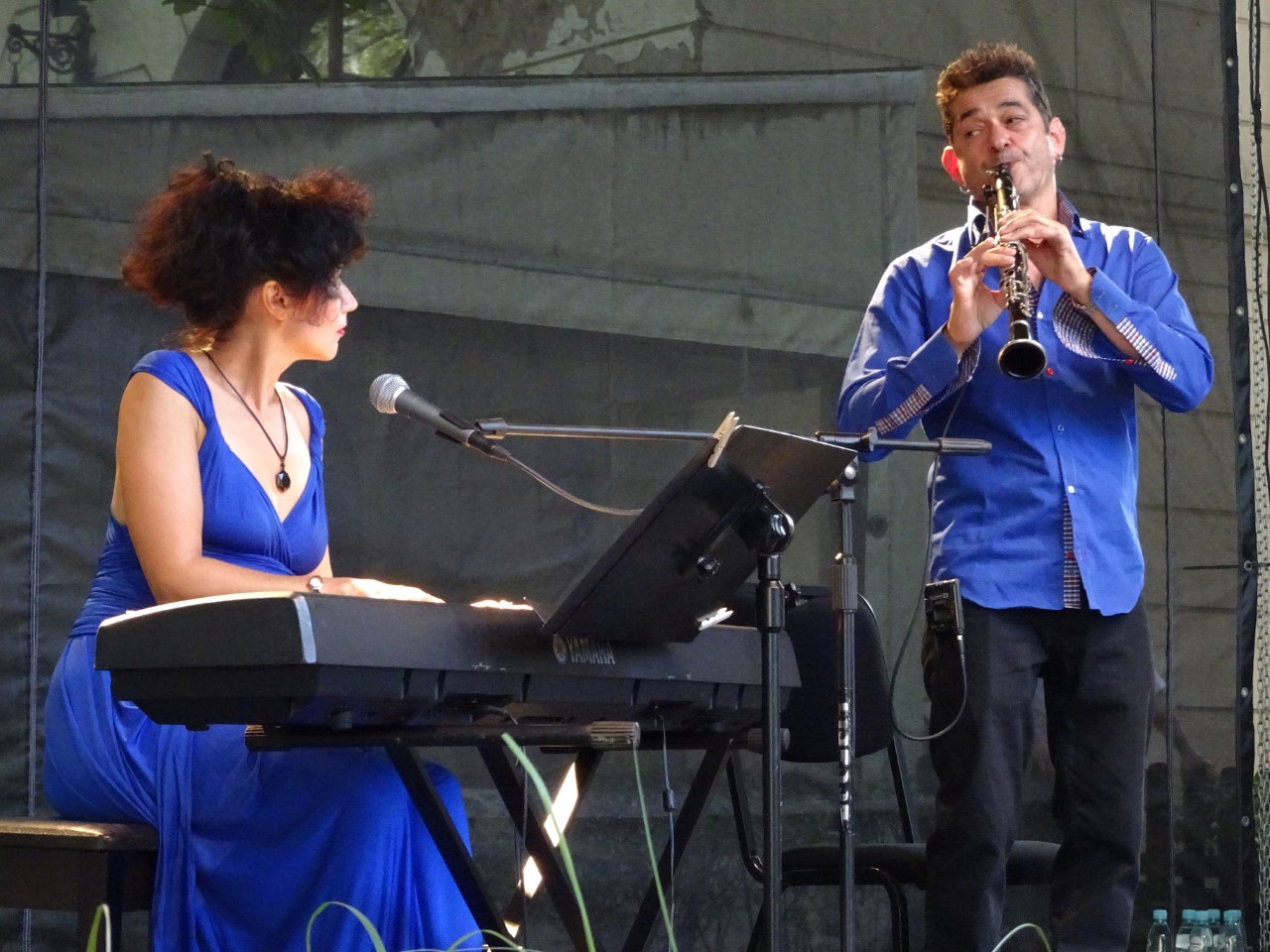 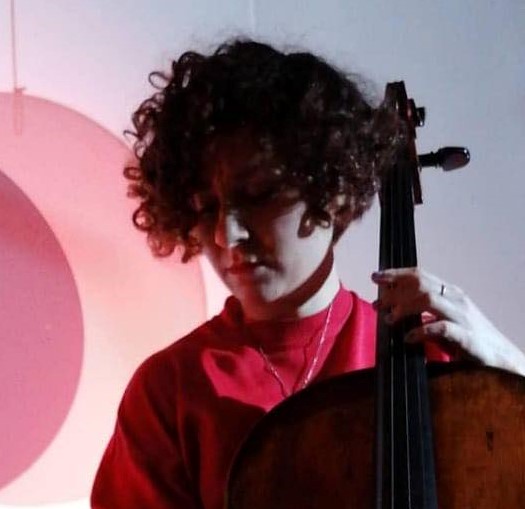 Ilana Cravitz is a London-based klezmer fiddler who performs and teaches internationally, delves into the eastern European Jewish music archive to bring new old material to light, and composes new traditional klezmer tunes. In 2020 Ilana launched the London International Klezmer Experience (LIKE) with an online festival, followed by a popular bi-monthly klezmer music & discussion forum, and publication of ‘12 Jewish Wedding Melodies’ in new arrangements she has made for string quartet. Ilana has toured the world with the London Klezmer Quartet, her book, ‘Klezmer Fiddle – A How-To Guide’ is published by Oxford University Press, and she leads bands and Yiddish dancing for klezmer keilidhs. Ilana is also in demand as a baroque violinist and viola da gamba player and enjoys playing English, Celtic and Scandinavian folk music. ilanacravitz.com 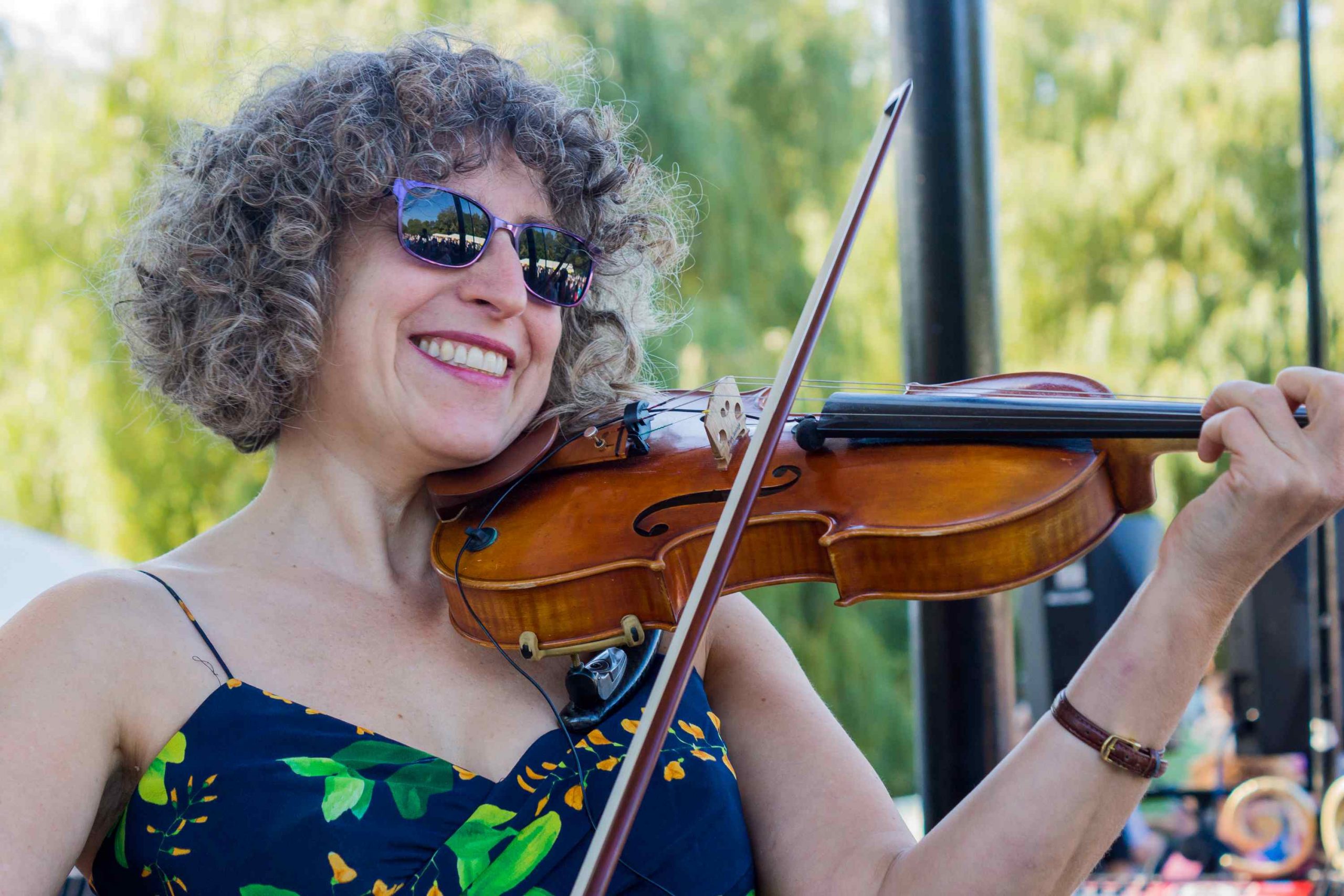 Singer/multi-instrumentalist Lorin Sklamberg is a founding member of the Grammy Award-winning Yiddish-American roots band the Klezmatics. He has composed and performed for film, stage and circus, produced a number of recordings and teaches Yiddish song from São Paulo to St. Petersburg. Critically-acclaimed projects include the Nigunim Trio, Saints and Tzadiks, the Semer Ensemble, Sklamberg and the Shepherds and Drawing Life (music/theater work commissioned by JMI). Last year saw the release of 150 Voices, a recorded collaboration between Lorin, Polina Shepherd and five choirs in the UK and the United States. Since 2000, Lorin has served as the Sound Archivist of New York’s YIVO Institute for Jewish Research, for whom he co-curates the Ruth Rubin Legacy website featuring field recordings of the renowned folklorist’s collection of some 3,000 Yiddish folk songs “One of the premier American singers in any genre.” – Robert Christgau, NPR. 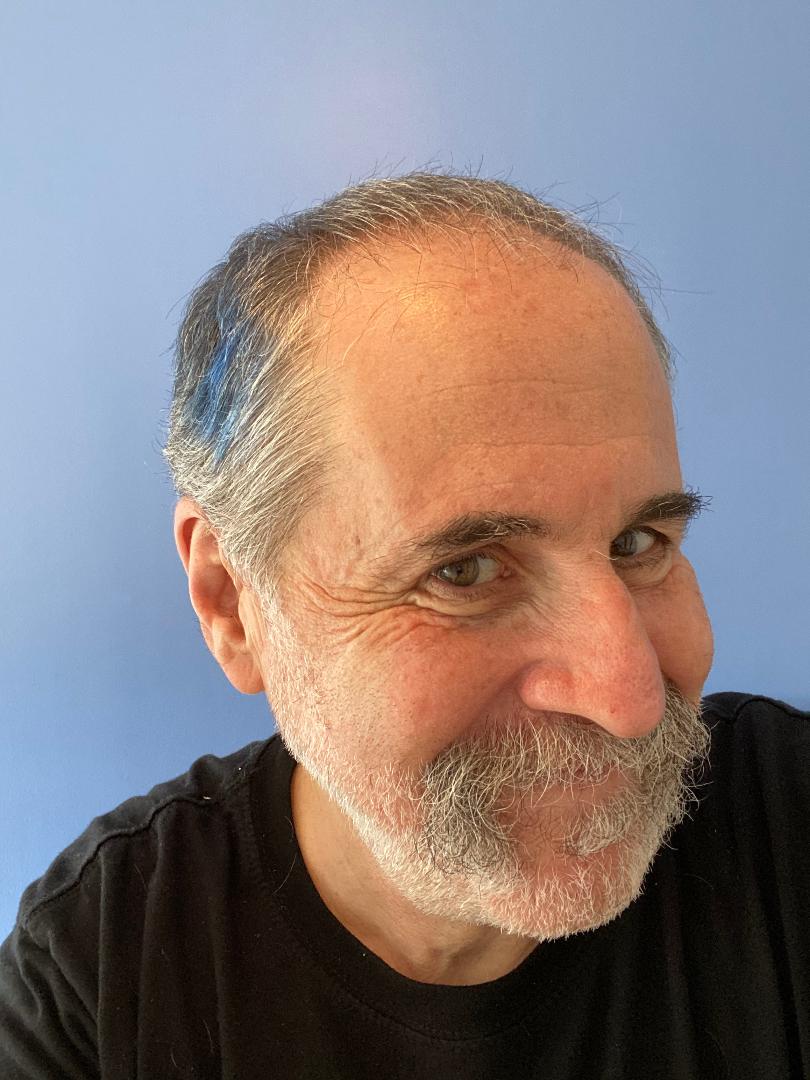 Michael Alpert has been a pioneering figure in the renaissance of Klezmer music for over 30 years providing a bridge between Old World Jewish culture and the contemporary Yiddish/Klezmer Renaissance. He is internationally renowned for his award-winning performances and recordings with Brave Old World, Kapelye, Khevrisa, Krakauer, Itzhak Perlman, Theodore Bikel – amongst others. He is a mentor, friend and colleague to many of the brightest new lights of contemporary Yiddish and Jewish arts and scholarship world-wide.

Michael Alpert tells the story of the Jewish people and the human race in song, music and the spoken word. Drawn from his family heritage and his own travels through the cultures and terrain of Europe and the Americas, his performances are sojourns through inner and outer landscapes, sagas of immigrant journeys, and epics of the universal search for home.

Michael Alpert has conducted extensive documentation of music and dance in Jewish Communities across USA and Europe, and is a leading contemporary teacher and researcher of Eastern European Jewish traditional dance. He has been Co-Director of KlezKanada, and Director of Jewish Heritage and Arts Programming at the Jewish Cultural Festival in Krakow. 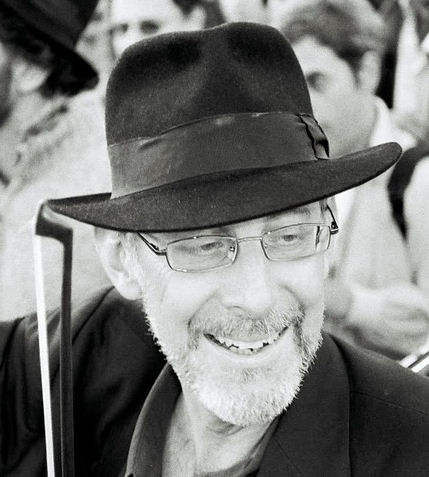 Supported by SCoJeC, the Scottish Council of Jewish Communities. 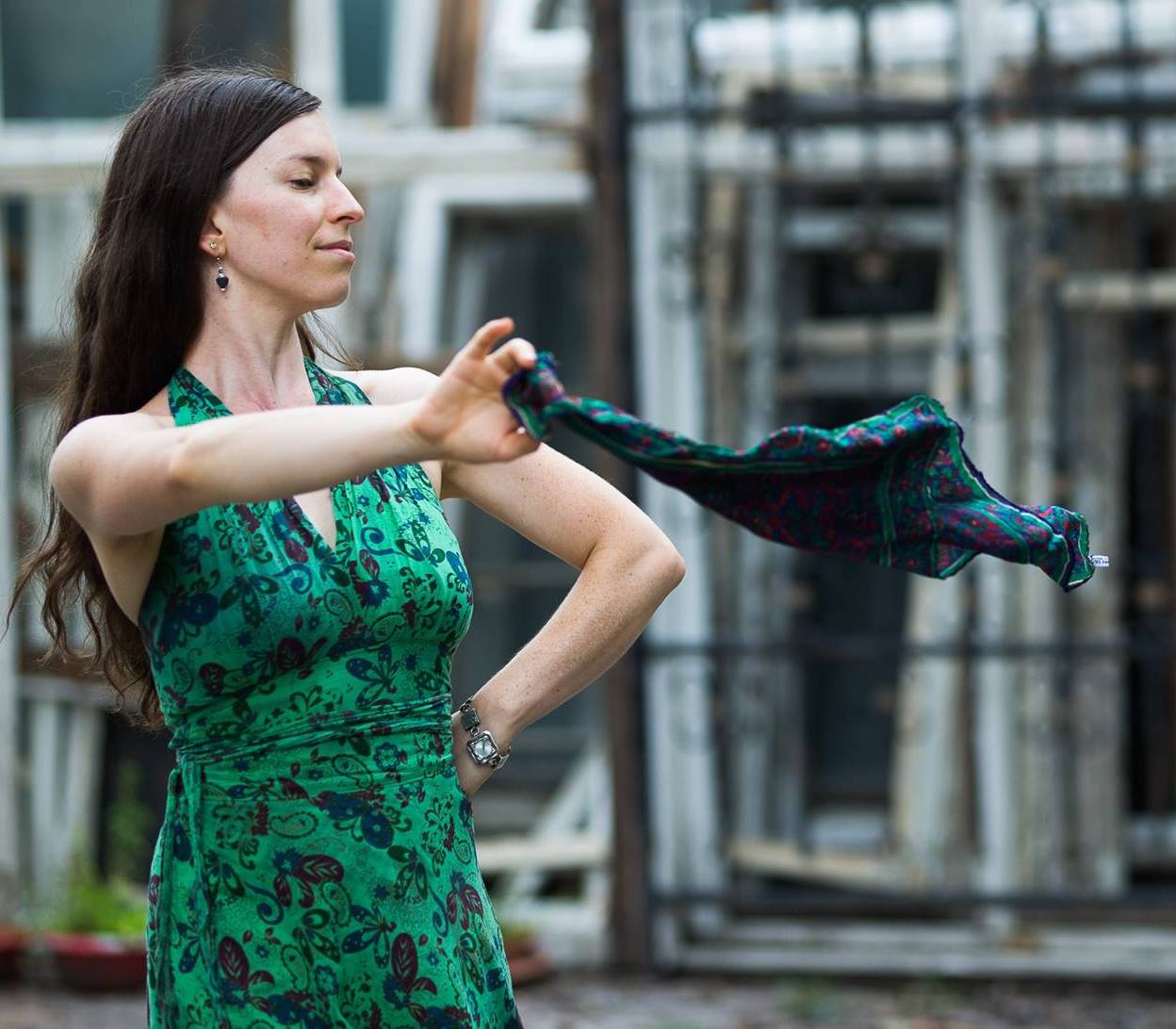 In 2019, clarinetist Michael Winograd released his long awaited LP “Kosher Style,” re-affirming his central role in today’s international Klezmer landscape. He tours the world performing with his band The Honorable Mentshn, collaborates with Pakistani superstar Zeb Bangash in the group Sandaraa, records and plays with a veritable who’s who of today’s top Klezmorim (Frank London, Itzhak Perlman, Geoff Berner, Alicia Svigals, The Klezmer Conservatory Band, Daniel Kahn, to name a few), appears in stadiums with Vulfpeck, and has produced records for Adrienne Cooper, Jeff Warschauer and Deborah Strauss and others.

As an educator, Michael has taught seminars and workshops at many of the hubs for klezmer development including KlezKamp, KlezKanada, Yiddish Summer Weimar, Furth Klezmer Festival, Paris Klezmer workshop, Bonn Klezmer Week and others. Michael is the Artistic Director of KlezKanada and a founder of the Yiddish New York festival. 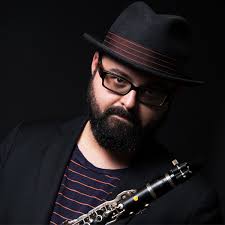 Ilya Shneyveys is an international performer, accordionist and multi-instrumentalist, teacher, composer, arranger and producer of contemporary Jewish music of all kinds. He is a founding member of Berlin’s famous Neukölln Klezmer Sessions and Shtetl Neukölln festival, and long-time faculty member at Yiddish Summer Weimar, as well as having taught at most of the world’s major Yiddish & klezmer festivals. His Yiddish psychedelic rock band Forshpil (LV-RU-DE) has just released a new album, and he is also a founding member of the Yiddish-Bavarian fusion project Alpen Klezmer (DE), winner of 2014 RUTH World Music Award at TFF Rudolstadt. Originally from Riga, Latvia, Ilya is currently based in Brooklyn, NY. ilya.shneyveys.com

The Scottish Council of Jewish Communities (SCoJeC) organises events to bring Jewish people together across Scotland and bring Jewish culture to the attention of the wider Scottish public.  As the representative body of all the Jewish communities in Scotland, the Council advances understanding about the Jewish religion, culture and community.  We celebrate our partnership with KlezNorth, allowing us to bring high quality Jewish and Yiddish content to Scotland.